The phenomenal growth of the Mobile App Development Industry is really astonishing and the growth still continues at an incredible speed. The remarkable growth of mobile applications is very well reflected through the smart devices like Smartphones, iPads and Tablets. The stunning statistics reveal that so far not less than 197 million apps were downloaded the world over and in the year 2016 total number of iOS apps downloaded were more than 25 billion and that of Android apps were more than 90 billion.

Let us discuss in detail the Mobile App Development trends in 2018.

Artificial Intelligence (AI) is not new for an experienced app developer. AI is now very popular in the mobile app development field. Artificial Intelligence is a familiar term for mobile app users and it has grabbed the attention of billions of people the world over. According to IDC the AI market will be worth more than $47 billion in 2020. The fast growth of robotic science, the bright prospects for the cars that can be driven without drivers and the growing popularity of personal assistants similar to Siri illustrate the growth of AI. The day is not so far away when the problems of the customers will be solved by the digital customer voice assistant which will identify the customer from his face and voice.

Emergence of Cloud Based Technology (CBT)

The limited storage space in the phones creates problem of space shortage for the users of Smartphones. Since the phones are without sufficient memory the users are unable to preserve vital data when they require. Now, the cloud based mobile applications provide the best solution to the problem of space shortage in Smartphones. Consequently, CBT is one among the prominent mobile app development trends that emerge in 2018. When the major portion of data can be stored in the cloud, the users of Smartphone need not worry anymore about the memory of their phones. Enterprise Mobility is another outcome of the introduction of Cloud Based Technology. While Enterprise Mobility is steadily catching up, it is expected that by the year 2019 the mobile cloud traffic will shoot up to 90%.

The Enterprise apps had been highly successful in the business world. As a result of more and more business enterprises as well as marketing firms coming forward to make use of the Enterprise apps, these apps are expected to continue their growth in the coming year also. It is expected that within the next two years about 50% of the business organizations will start using the 10 enterprise apps. The great advantage of the Enterprise apps is that they relieve the employees from the stress and they are enabled to access the data even from remote locations. The Bring Your Own Device (BYOD) Concept has revolutionized the entire business scenario. In the year 2018 these apps are expected to flourish further since most of them are customized for specific purposes.

More industry sectors will come under the influence of IoT

The Internet of Things (IoT) helps the retail business as well as real estate field in a great way. Under the influence of IoT, the real estate industry introduced the concept of Smart Cities. Various other fields such as education, healthcare and automotive are also likely to come under the influence of IoT. Even Google and Apple are encouraging the development of apps that are based on the IoT concept because of its growing influence. Google even brought out the Android Things in their bid to support IoT. Today the IoT market is worth $157.5 billion and by the year 2021, it will be worth $661 billion.

2018 is going to be the year of wearable apps. Anticipating the great demand for wearable apps, Google and Apple had already launched their smart watches. There will be more number of buyers for wearable apps in the year 2018. Wearable app is a necessity today and it is no more a fashion to have the wearable apps. Wearable apps have vast scope in healthcare industry. They can monitor various aspects like heartbeat, eating habit and physical fitness of a person. The total sale of wearables is expected to touch the $172 million mark in the year 2018. It is expected that by the end of 2018 there will be not less than 350 million wearables all over the world.

Robust security will be a prominent feature of the apps

People will come forward to download the apps only if they are secured. Today, the app developers pay more attention to ensure that the newly developed apps are provided with robust security. The app developing companies are aware of the fact that they cannot satisfy their customers without providing robust security for their apps. Today, any app must have robust security as a prominent feature because without robust security the user cannot use the app to collect confidential data as well as private data. In-built security will be considered as a great feature of the apps which will be developed in the coming years.

AR and VR will be offered to diverse industrial sectors

Many of the popular gaming apps like the Pokemon Go are designed based on the new concept of Augmented Reality and Virtual Reality. In 2018, the services of AR and VR will be made available to other industries also. While VR will be more useful in games and events, the AR services will be made available to healthcare, retail and real estate sectors. It is estimated that by the year 2021, the AR and VR business will be worth $108 billion. Out of the $108 billion, the share of AR and VR will be $83 billion and $25 billion respectively. Augmented Reality has emerged as prominent player in the field of mobile app development. During the years to come AR will be more concerned with improvement of battery life and connectivity. Though VR has already made its presence felt in the market, it may take more time to gain popularity. For the Google Daydream View, mobile VR will be provided with the installed base ‘Explorer’.

The concept of cashless economy has been accepted by people all over the world and as a result mobile payment apps and digital wallets have become very popular. Payment gateway apps like PayPal and PayTM have users all over the world. Online payment methods will be preferred by more people in the coming years because it is secured, convenient and fast. The trend in the mobile apps developing industry in 2018 will be to develop more secure, easier and faster apps for online payments. The developers of online payment apps should ensure the confidentiality of the private details of the cards. It is expected that the online payment industry will be worth $503 billion by year 2020.

AMP (Accelerated Mobile Pages) ensures faster loading of the mobile pages. The project to develop AMP was jointly launched by Google and Twitter in 2016. In 2018 the app developers will be designing this type of apps. Google will be introducing isolated search index for mobile web.

Hybrid Apps will be more popular

Year 2018 is likely to witness the rise of On-demand apps. These apps are very simple and are easy to use. On-Demand apps are designed mainly for public use like taxi apps, travel booking apps, food apps and laundry apps. The sudden growth of On-Demand apps has made it a very stiff market. On-demand apps are likely to dominate the App store. These apps are designed keeping in mind the end users. Those who use the Uber app are assured of an excellent traveling experience and one can order for his favorite food items using the online food apps.

Chatbots for better ‘User Interface’ as well as ‘User Experience’

Earlier, only a very few Android as well as iOS apps used to implement Chatbots to improve the quality of UI as well as UX. In the year 2018 many mobile apps will be implementing Chatbots so as to provide UI/UX of improved quality. This will be a boost to the app development industry. The customers welcome the Chatbots since they are able to get quick replies when they make queries. The Chatbots also help the customer service executive by providing useful data about the type of queries which are very common from the majority of users. This will enable the Executive to address the issues in a better way.

The mobile app industry will make use of advanced technology to make the apps more exciting. When some of the images take more time for loading the users tend to avoid those imagers. Lazy Loading is offered as the best solution to this problem. Now the images will start loading only when their turn comes.

The Android Instant Apps function smoothly and are very easy to operate. They are native apps and with a single click they function as website. Hence one need not install them. These apps enable the users to save space. Google introduced them in 2016 and the users were able to view the cloud-based version also. As a result of widening of its operations special focus was provided on the gaming apps thereby increasing the user engagement. Many new and advanced features are added to Google Play Console also. Addition of subscriber business is another notable development. This feature will enable the app developers to manage and maintain subscriptions in a better way.

One of the new products which will be offered by app developers in the upcoming year will be Blockchain. This is a product of innovative technology and it keeps the record of all transactions of the company. The record cannot be changed without changing the block. Blockchain ensures protection of data from hackers.

The trends in the mobile apps developing field keep on changing every year and every year new products based on the most advanced technology are introduced in the market. The customers find the new products very useful and also very easy to use. The mobile app developers will face stiff competition in the coming years and their first and foremost task will be to get updated with the new and emerging trends in their field so as to survive and grow in this highly competitive field. The field of Mobile app developing will be more challenging in future.

The app developers who are determined to accept the challenge in the upcoming year can start updating their knowledge now itself. They can also start designing and developing of the new mobile apps for 2018. 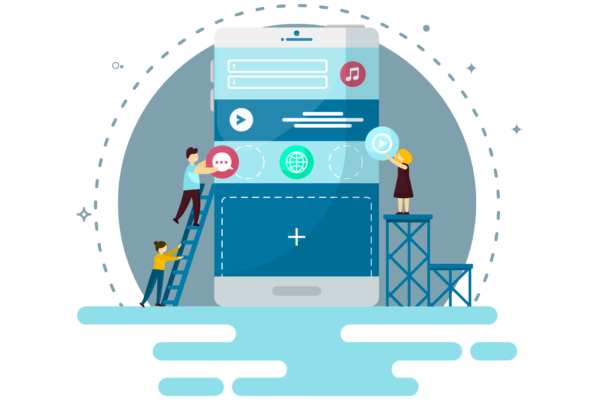 The Major Factors that Impact the Cost of App Development

Things to Identify Before Developing a Geo-location Built Mobile App